Tivi magazine has nominated Director General of the Population Register Centre Janne Viskari as the influencer of the year 2018. The selection was published in Tivi on 5 December 2018. 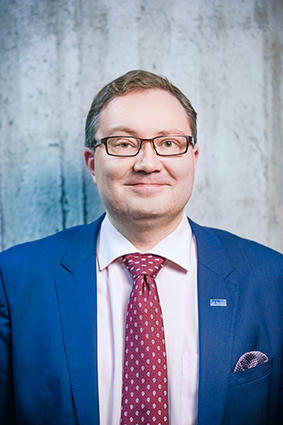 “Viskari is rethinking the central government's way of carrying out digital projects and handling leadership. He actively participates in discussions online and offline, tweeting and hosting the Population Register Centre's Suomi.fi podcast. This year the British Apolitical online service included Viskari in its list of the 100 most influential people in digital government. So it’s no wonder that our editors chose him as the Tivi influencer of 2018”, Tivi staff say explaining their choice.

This development follows the changes of early 2017 when the Population Register Centre became responsible for a number of tasks related to promoting digitalisation. These tasks include coordinating the operations of digital security management team VAHTI, central government's project portfolio, and developing enterprise architecture and various expert services.

Viskari believes that the significance of digitalisation will continue to increase in society.

“Fiscal sustainability will be Finland's greatest challenge in the future. Our population is going to grow old and retire, the number of employed will drop and collected taxes will decrease. We will need to be able to provide public administration services equally comprehensively but with lower production costs. We need to get citizens who are comfortable using electronic devices to also use public administration services electronically. More expensive visitation services should be primarily reserved for those citizens who don’t own electronic devices or who can’t use them for one reason or another. Of course, electronic services will then need to be much better and have high usability – in order to truly serve people”, emphasises Viskari.

“The key to a better electronic service experience is in the internal mechanics of services. We need to get information moving automatically between different systems, and this poses higher compatibility requirements for people constructing these systems. When you increase the mobility of information, it is essential to pay attention to the ethics of using people's data – we can't use it carelessly, much less gather it in one single place. The absolute heart of digitalisation is being able to maintain people's trust in that the public administration will not act like American platform giants when it comes to collecting and using data”, Viskari adds.

Another influencer from Population Register Centre on Tivi's list

At the Population Register Centre, Rousku is the General Secretary of digital security management team VAHTI, and as such, Rousku is responsible for the team's operative actions. In addition, Rousku is responsible for the Population Register Centre's digital security services developed and produced for public administration. Rousku has actively worked in ICT and information security, writing nonfiction works and giving talks since early 1990s.